Going through my collection and see a few of these. They appear to be reasonably rare and many do not have coupons attached. Are there collectors that try to complete the set or just too few around to be obtainable?

CuriousGeorge wrote: ↑
Sun Sep 05, 2021 9:10 pm
Going through my collection and see a few of these. They appear to be reasonably rare and many do not have coupons attached. Are there collectors that try to complete the set or just too few around to be obtainable?

Steven - near impossible to
Obtain w/the coupon…..especially the Cobb….Wow!!!!
Top

Love those, Steve! More so because they came from a bakery in my home borough.
Top

Apparently Jay there are two different tabs differentiating two Fleischmann locations. Take a look at this Wagner that sold at Heritage a few years ago (not mine). Same card, different coupon.

You may want to contact Bill C ornell, who knows pretty much everything about the set.
https://thetraderspeaks.com/d381-fleisc ... -bakeries/
Top

Thank you very much
Top

Hopefully, I am not violating any rules by outing an very visible auction, but this is a pretty amazing piece.

You’re safe, Kevin. The only thing you can get banned for on here is selling fake Yum Yums.
https://www.flickr.com/photos/calvindog/albums
Top

Kevin-Don’t BF2 use M101-4 images? These do not, they have the typical Fleischmanns images.
Top

Jay - the premium does not have anything specifically to do with BF2s. It was obtained by redeeming the coupons from the D381 Ferguson cards. (Images stolen from the internet.)

Kevin, just so we're clear (or to help me understand), the pillow topper is for a Ferguson product, not Fleischmann, correct? And we do not know if Fleischmann offered a similar pillow topper, do we, although they offered pretty much the same cards? So what you have shown was obtained only by redeeming the D381 Ferguson cards?

Jay, thanks for bringing up the BF2 pennants. I've never been convinced that they were issued by Ferguson, but I haven't been keeping up on the set or any recent discoveries of old advertising. I am also not convinced that others could not have issued these as well. Same goes for the scarcer large version of the pennants that also use Mendelsohn m101 photos. Have you figured that out or seen something on that?
Top

Munson#15 wrote: ↑
Tue Sep 14, 2021 6:40 am
Kevin, just so we're clear (or to help me understand), the pillow topper is for a Ferguson product, not Fleischmann, correct? And we do not know if Fleischmann offered a similar pillow topper, do we, although they offered pretty much the same cards? So what you have shown was obtained only by redeeming the D381 Ferguson cards?

Jay, thanks for bringing up the BF2 pennants. I've never been convinced that they were issued by Ferguson, but I haven't been keeping up on the set or any recent discoveries of old advertising. I am also not convinced that others could not have issued these as well. Same goes for the scarcer large version of the pennants that also use Mendelsohn m101 photos. Have you figured that out or seen something on that?

I did not know much about this set until the last few years and the more I see the more I like about the set. Great selection of players, I really like the Cobb. I think for the people that like challenges this is a great set.

I do have to give the shameless plug that the current Sterling Auction has 12 Fleischmans including a Stengel with tab.

Nice cards Lee--good luck.
Thanks for the response Kevin, I thought so, but wanted to make sure, as the two sets are so similar. I do see that there are very slight differences in player and pose selection, as the pillowtop Cobb is different and I do not believe Wajo is known to exist in Fleischmann.

My questions last night were directed to Jay but of course go out to everyone here. There seems to be a lot of info on the two bakeries and their cards that has not necessarily been confirmed. The first is the origin of the BF2 pennants. Are these the “Prize Photo Pennant Ticket wrapped in each 5¢ loaf of Honey Bread” described in the Ferguson Bakery blotter? I believe everyone assumes so, but I’m unclear why they used the word “ticket”. Does this look like a ticket? 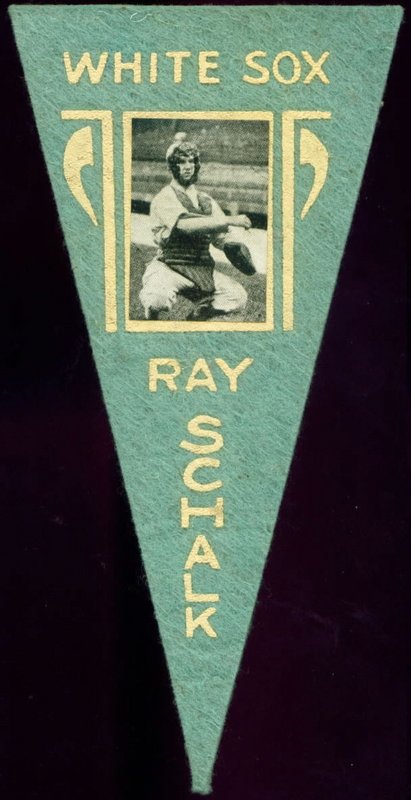 Also, after paying whatever license fee to use the 100 or so Underwood and Underwood photos for the D381 set, why pay yet again to Mendelsohn for use of the 100 or so different photos used in BF2? That seems like a lot of effort for very similar prizes offered the same year. I think it just as likely these are competing efforts from different companies.

Has anyone seen a pennant of the kind depicted on the blotter–Evers with a d381 picture? Of course the pillow topper has several stitched to the felt, but are there individual pennants of these or other players who appear in D381? Either the large or small size?

Finally, we know that there are large, 9x24" pennants that use the Mendelsohn photos, although they are scarce and almost certainly a redemption prize. These too are commonly referred to as Fergusons without any confirming evidence that I have seen. Again, why have such similar prizes using completely different photo sets? Keep in mind that Ferguson also promised a pillow topper with movie stars. I know of at least three other companies that offered those large pennants with actors and actresses at that same time, and others issued similar pennants depicting military men. Why does everyone assume that all baseball picture pennants are from Ferguson?

Todd alerted me that there was a D381 thread. Since this may never happen again, I feel compelled to do a brain dump here...

I wrote an article for Old Cardboard in 2017 on the set (their final issue, as it turned out). I've learned a few more things since then. There are very few Ferguson cards in existence; I have 3 with the coupons attached, including the E.Burns and Duffy Lewis cards that Kevin posted here, as well as one of Frank Allen. Some of the coupon-less cards attributed to Ferguson are actually Fleischmann cards (there are 2 on eBay right now) . I'd bet that are fewer than 100 Ferguson cards in the hobby.

There were 100 players issued by Fleischmann. There are another 4 including Johnson and Jennings that I am certain were issued only by Ferguson. There are 20 variations with the Fleischmann cards, all of which are differences between the cards issued from their Bronx and Manhattan bakeries. The variations are usually either just photo-cropping differences or spelling mistakes, e.g., the Stengel card.

As I wrote to Todd, I'm 99% certain that the BF2 pennants attributed to Ferguson Bakery don't, in fact, have anything to do with that operation. Burdick made an understandable mistake when he saw the blotter (or whatever it is) shown above. Ferguson Bakery was a small Boston company that got bought up by General Baking around 1916. They had a big fire on site and closed down soon after. I highly doubt they issued 1000's of small pennants that we now refer to as BF2's, as that would've been well beyond their means. The pillow top is the only item other than the D381 cards that came from Ferguson, I think. I know of 3 or 4 other pillow tops besides the one in Christies. Dan Mckee has had one on eBay for years.

The small pennants were issued in the Midwest and they seem to be closely related to the M101-4 and M101-5 sets. The rare large pennants may have also come from there. I'm not convinced that they have anything to do with Ferguson. The blotter is a tease, in other words.

There was a company called Bradford in St. Joseph MI that made "bakery novelties". Their imprint has been found on the back of some of the large pennants and their name is found on every D381 from Fleischmann. I think they manufactured *all* of the pennants, plus many other 1910's-era cards that we're familiar with now. They were in business for many decades, but they got out of the novelties business when WWI started.

https://thetraderspeaks.com/d381-fleisc ... -bakeries/ has a lot of my thoughts on the set, plus images of the 70 or so cards I have now. Bradford credit on the back of a large (9" x 24") player pennant. There are also pennants of the same size and rarity for silent film stars.

Industry ad from General Baking with a list of their 1911 acquisitions. There are several bakeries that became associated with cards.

This is a 1915 photogravure from the Boston Herald that used Underwood & Underwood photos of the Red Sox. Most of these players appeared in the D381 set. Tragically, even though he's shown here, they didn't use Ruth in the set!

Two more of the pillow tops, plus another one with silent film stars.
Bill Cornell
https://thetraderspeaks.com

Bill - Thanks for the info. I was hoping that you would chime.

Do you have any idea what the Ferguson Bakery blotter is referring to when it states that "A Prize Photo Pennant Ticket wrapped with each 5c loaf of HONEY BREAD"?

Here is an image of Dan McKee's pillow top. It is interesting that the Cobb pennant lists his position as well as his full first name as opposed to the other pillow tops shown.

Kevin - I've never seen "A Prize Photo Pennant Ticket wrapped with each 5c loaf of HONEY BREAD" items. It might be just a simple throwaway coupon. I've also seen just this one blotter (owned for many years by Bob R. in Florida). That item is a real treasure, since we'd know far less without it. It links the pillow top to Ferguson. I've kept my eyes peeled for 10+ years, but I've yet to see another one.

All D381's are scarce, but there are probably 100x as many Fleischmann cards as there are Fergusons, especially since there have been 4 large-ish group of Fleischmanns that have come into the hobby since 2016. We'll almost certainly never see a big Ferguson find (although if we did, it would turn up in the possession of some Boston-area family).

I've got 2 of the large pennants of Schulte (not in the D381 set) and Donovan (in the set, but with a different picture). I don't think they have anything to do with Ferguson Bakery. Tangentially, I've now got 5 large pennants of the silent film stars. Those were much easier to acquire since there were ads placed in magazines that let you pick ones you wanted.

Todd-Sorry, I just saw your question. I know absolutely nothing about these issues. I just saw the Christie’s write-up mention the BF2s and that is why I threw it out. I am really enjoying the education I am getting from you, Kevin and of course my old friend Bill.
Top
Post Reply
22 posts • Page 1 of 1